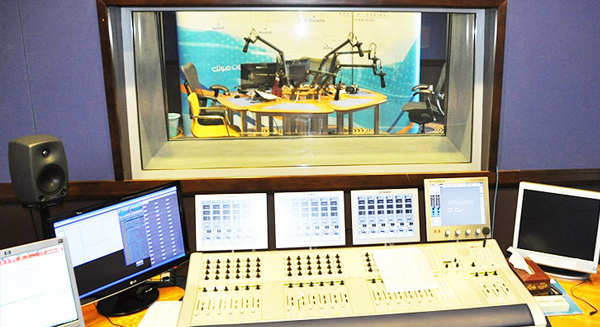 Sout Al Khaleej, a Khaleeji radio station owned by one of Qatar Media Corporation’s divisions recently fitted out additional studios and edit suites at its facility in Katara, the cultural home of Qatar and the seat of Doha’s film festival. INC Systems Integrations was contracted to undertake this project, which included fitting out four new rooms and upgrading two others

Azzam Salahat, Project Manager for INC System Integrations, says the end user’s main objective was to add another radio studio to the existing facility and upgrade the existing setup to ensure a centralised technical structure for its radio operations.

“Sout Al Khaleej was looking to add a new studio, a DJ room, an edit suite and a ProTools room to its existing operations.

“In addition to this, they wanted to upgrade their existing studio 1 and DJ 1. All of these needed to be connected to a new Central Apparatus Room (CAR) that we built in order to centralise the operations at the facility,” he explains.

A significant addition to the new setup is a visual radio feature in each studio, should the end user have such a requirement in the future. The new setup allows Sout Al Khaleej to broadcast using visual radio service as well as provide radio over internet as IP radio.

The workflow involves all of the studios and technical rooms at Sout Al Khaleej linked to a central router, with a number of final outputs available such as audio, IP stream and visual radio.

“This installation has ensured that Sout Al Khaleej has the flexibility to broadcast in different ways,” explains Salahat.

The Studer OnAir 2500 system with 18 faders for the edit room offers a wide range of features that can be easily activated, deactivated or customised using the configuration user interface. It is a self-contained architecture that includes a compact digital broadcast console with minimal external core and wiring complexity and set-up.

“The OnAir 3000 digital and production mixing consoles installed in both studio 1 and 2 come in a completely new design that leaves minimum room for error,” explains Salahat.

“With hot swappable desk modules, controller card and DSP cards, error messages on both the GUI and external alarm signal features, Studer is a reliable fit in the broadcasting environment. Maintaining the flexibility in specification and simplicity of learning by incorporating the (Touch’n’Action) user interface that has been used in the previous successful OnAir 2000 model.”

OnAir 3000 has also been used as a central router with the Studer Router 1000 software that can be operated easily and does not require any extensive training and controls the OnAir 3000 mixing desk I/O system.

Adeeb Abed, General Manager at INC Systems Integrations says: “VSM system has been a great addition to the Studer OnAir 3000. It offers a safe and flexible operation through the user panels and interfaces that can be configured without limitations to meet the requirements of Sout Al Khaleej. It offers the simplicity of installation due to the IP infrastructure of the VSM (virtual system management) network including all of its control panels, interfaces and external devices.

“For any future expansion requirement by Sout Al Khaleej, VSM can be integrated with most of the popular broadcast equipment including video routers, video switchers, audio routers, audio consoles, multi-viewers, intercoms and several other third-party devices.”

With this installation, Sout Al Khaleej has been able to segregate its rooms for different kinds of programmes.

Studio 1, for instance, is being used for talk shows and entertainment as well as educational programmes, while Studio 2 is built to be used as a music production studio. This studio is particularly significant as it has been created to enable local artists to create their albums that will premiere on the radio station. It will also receive the guest singers to sing and participate in interviews. In fact, some well-known music artists have already created their albums in this room although Sout Al Khaleej wanted to keep their names under wraps until the launch of those songs. A special DJ room has also been fitted out to facilitate interviews and talk shows, while a new edit suite has been handed out to the client for voice-over programmes and recorded content.

The studios use a mix of disc and tapeless devices until they fully transition to a tapeless workflow in the future.

“We have built these studios in the classic radio studio style but with high-end equipment,” explains Salahat. The project went on air in Q4 2013.

As with all such projects, one of the key challenges for the integrator was enabling the staff at Sout Alkhaleej to migrate from a manual workflow to a more automated setup.

“This was a huge challenge,” says Salahat.

“We had to integrate the new setup with the old, while it was still on air. We undertook this successfully. We have tested this fully and it is working very well,” he adds.

The system, which is centralised with a central audio matrix, is also open to expansion. Although this project was awarded to INC in December 2012, the facility could not be fitted out until mid 2013, because the site was not ready. Since then, the systems integrator worked on site for three months with a dedicated team including a project manager, an engineer and five technicians.

Sout Al Khaleej is now on air with its new system.

Low-cost Football Shirts, http://www.football-shirtssale.com/ Online
At the very coronary heart of COPA from our earliest days is the renown Basic line which now comprises greater than 250 retro football shirts, jackets and tracksuit trousers, all of which will be United Kingdom Cheap Football Shirts shop:https://www.football-shirtssale.com/ worn for active sports activities or casual use – on and off the pitch. Then merely take a look at Lovell Soccer’s collection of duplicate football shirts priced at £20 or under. Kitbag is the home for cheap football shirts on-line – Your golf equipment colors run by our veins. The reality is, not all duplicate football kits sell out. We’re in a position to personalize your football kits with your club badge, sponsors logo and printed cheap replica kits numbers at low price costs.
Low cost football kits china merchandise are hottest cheap Manchester United football shirts in North America, Western Europe, and South America. Prostar, Macron, Mitre, Precision and Stanno are icons with regards to football kits. That is the new Chile 2018 House football shirt cheap Arsenal football shirts by Nike. Savings made here can go in the direction of low-cost football tools or different keenly priced merchandise. Discount football kits by Kitking symbolize great value and quality, and we’ve got a transparent deal cheap Chelsea football shirts with affordable prices, speedy delivery and great customer service.
Football Kits, goalkeeper kits and cheap Liverpool football shirts referee kits are all out there from Mitre and can be utilized in plenty of conditions, as well as on completely different surfaces. Nike teamwear and Adidas teamwear are the market leaders for training put on, but we promote cheap Tottenham Hotspur football shirts many manufacturers like Givova, Joma, Stanno, Mitre, Umbro, Kappa, Macron, Errea and Mitre, the place cheap coaching wear is on the market at low cost prices.
With an unlimited vary of football gear held in inventory, hundreds of cheap Manchester City football shirts orders are processed each month and often dispatched within two working days, or optionally available next day supply is available at a small cost. All Mitre football kits feature cheap Real Madrid football shirts daring designs and plenty of of our jerseys and t-shirts feature ProFlow technology and mesh ventilation to help keep the physique cool throughout the heat of the game for max breathability.