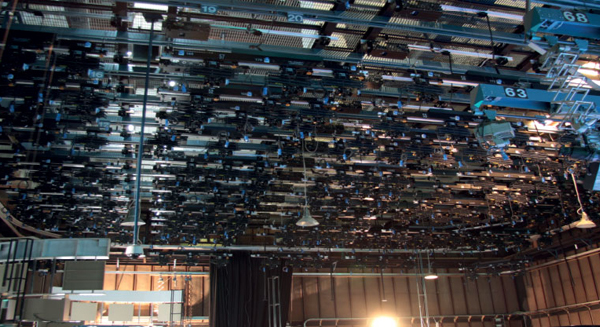 Al Jazeera Sport, which owns the exclusive Middle East broadcast rights to many of the major football leagues, recently contracted Qatari-based systems integrator INC to upgrade the lighting system for Studio One, the oldest studio at the complex.

The 500sqm studio with a height of 10m had a 12-year-old lighting solution that has long been due for an upgrade. The studio, which has been used to produce several programmes for Al Jazeera Sport and presently accommodates around five sets on the studio floor, previously employed 100 self-climbing hoists and 300 lighting projectors that had to be adjusted with the help of manual pantographs.

INC was contracted to dismantle and replace the old grid and 5k projectors, and install a new grid with 100 new self-climbing hoists with assorted types of lighting projectors including Fresnel lights, LED lights, cool lights, and moving head lights. 100 motorised hoists with pantographs. A DMX option was used for looping into the same hoist, so that connecting one of the DMX points could loop into the same hoist for the other points.

A mix of lighting technologies including LED luminaires, cool and day lights as well as the profiles projectors and high-end LED heads have been used in the upgrade. Solutions from Desisti including 100 hoists, 300 spider junior pantographs, 1 HDC120 digital hoist control and 100 LED Magis 120W solutions were also deployed as part of the project.

The systems were chosen with cost efficiency and the availability of support services in mind.

Adeeb Abed, GM of INC stated that the project was undertaken in three phases.

INC had a tight deadline of four weeks from the time of being awarded the contract to completing the entire project.

“This was a fast track project. We scheduled two shifts to complete the job on time. We had to work in stages as the studio was operational and On-Air so a great deal of coordination and liaison was required.”

The system was designed for “the multiple purposes of the studio, which is divided into several sets designed mainly for sport’s talk shows including analysis, and pre- and post-event talks,” added Adeeb.