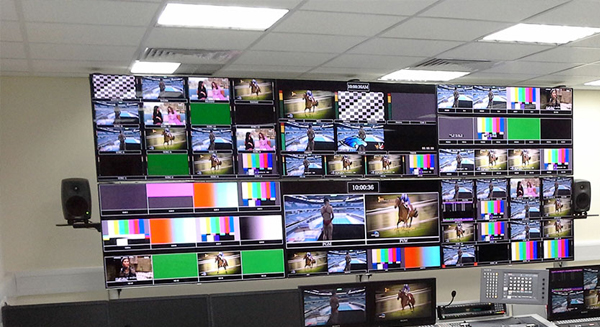 DMI recently revamped its Al Marmoum studio to a 3G/HD/SD ready facility to cater exclusively to its racing channel. Vibhuti Arora takes a closer look at how the broadcaster pulled off the project in record time

Dubai’s state broadcaster Dubai Media Inc (DMI) has revamped its studio in Al Marmoum, Dubai. Al Marmoum Studio caters exclusively to the Al Marmoum camel race track and has been built to cover the camel races. The studio’s revamp coincides with the launch of DMI’s racing channel in HD. The facility was kitted out by INC System Integrations early this year.

“The studio upgrade is part of our greater goal to migrate to a fully file-based 3G environment,” explains Saleh Lootah, CTO of DMI.

“We had an existing studio at Al Marmoum camel race track with SD infrastructure, which we wanted to upgrade to a 3G/HD/SD file-based facility as part of our mandate to switch to an HD file-based workflow by 2015,” adds Lootah.

The end user wanted to entrust the project to a company that could deliver a turnkey solution within a short time frame. The SI was to facilitate the planning, design, installation, testing and commissioning of the project.

INC won the bid for the project in December 2013. The SI was required to deliver the studio by March 2014 to enable the broadcaster to cover the camel races held during the Al Marmoum Heritage Festival and the Camel Race Championship. The festival is held every March.

“We decided to inaugurate the new upgraded studio with the broadcast of the Al Marmoum Heritage Festival and Camel Race Championship. It was crucial that the facility was handed over to us on time, in order for us to broadcast the races using the latest systems. Along with the inauguration of the upgraded studio, we also launched our Dubai Racing Channel in HD,” comments Lootah.

The main requirement of the studio was to have an HD file-based workflow. The entire infrastructure for the project, such as cables, connectors, patch panels and wiring, was to conform to 3G specs.

The project had multiple facets to it. Hence, it was divided into various phases of civil works, fibre-optics connectivity and testing, followed by system installation, testing and commissioning. This was the best way to go about it, considering the time-bound nature of the project.

INC System Integrations was also required to do operational and engineering training for the end user.

Commenting on the stipulations set by the end user, Adeeb Abed, General Manager, INC System Integrations, says: “The limited time made the project very challenging for us. The project was successfully executed, tested, delivered and made ready for operation by March 14, 2014. As required by the end user, the camel race championship was broadcast in HD from the new facility.”

Since this studio was built to meet the specific demands of the Dubai Racing Channel, it had to have specialised equipment that catered to the requirements of sporting events.

In order to ensure a state-of-the-art sports broadcasting facility, the studio has been equipped with solutions suited for sports application such as Super Slow Motion servers, Sports Graphics, INCAMs and wireless cameras on vehicles.

The studio includes a CAR, ACR, PCR, STD floor, edit room, voice over room, microwave room and a communication room. These are connected to various active points around the racing tracks using hybrid fibre cables for the cameras and dark fibre cables for the video/audio receivers as well as multi-core audio cables (for some locations).

“Delivering the video signal from various points around the track was limited in the old set-up due to limited fibre connection and RF links. Hence establishing proper connectivity within the facility was a key part of this project. This was to ensure that the action was captured to the last second from every corner of the track so our viewers don’t miss any part of the races,” explains Lootah.

“We worked very closely with Vislink to accomplish the scope of work requested by DMI for wireless camera transmission. The selected system was 8x Tx/Rx of MTV-HD2, with frequency ranges of 2-2.7GHz system, which was seamlessly integrated with the overall studio to deliver a real life experience of the races, live for the viewers,” explains Abed.

Connection to the hub

The new studio is connected to the main DMI station through SNG, along with a microwave link that has been installed as a backup.

One of the key vendors in the project is Vislink, whose relationship with DMI goes back many years.

For the revamp, therefore, Vislink (Gigawave) came as a natural choice as the manufacturer had previously deployed transmitters and receivers for DMI’s facilities, according to Paul Cotterill, Manager – System Solutions, Vislink Middle East and North Africa.

“Our task was to provide seamless coverage of the site, including all race tracks and VIP areas, leaving no blackspots. To achieve this, Vislink delivered a 10-channel wireless camera network consisting of several Vislink Gigawave products.

From capture, the various camera signals were relayed to the INC studio system for programme mixing. For outgoing links, DMI used a Gigawave MVL point-to-point link and a Vislink Advent Newswift high-capacity satellite terminal to immediately transmit footage from the site.

In addition to the ground network, a third-party UAV was hired for the event and fitted with a Gigawave MNTX transmitter, allowing for aerial footage to be quickly and easily integrated into the receiver system. A Gigawave handheld receiver was also used to let the ground team control on-board camera shots captured by the UAV.

“Designed to receive multiple RF and video channels simultaneously, to provide coverage of the event, this is the first fixed MDR installation in the UAE,” claims Cotterill.

14 wired and wireless cameras are distributed all over the tracks in order to cover the races from different angles.

The camera feed/signals along with the commentator’s voice come into the audio/video production equipment. Feeds from the wired cameras

EVS servers are used for processing the video recordings and slow-motion footage. For graphics and branding, the broadcaster uses Vizrt Trio.

For transmission and connections to MCR, DMI provides an SNG. There is also a microwave link as a backup.

“The system is highly scalable as this is a standard feature in all INC designs to allow the client the flexibility and the choice of expanding and upgrading the system in the future,” comments Abed.

Since the facility was built on an existing studio, it involved a complete refurbishment of civil works to conform to the requirements of a technically robust facility.

“Civil works posed a challenge because we were working on an existing facility. Ducting and cable path conditions for fibre-optics between the racing tracks and the studio were also not easy. There was a time constraint that left us with zero margin for error,” adds Abed.

DMI’s Lootah says that the project marked yet another milestone for the state broadcaster, in its quest to modernise and offer best-in-class output to its viewers.

“The entire infrastructure of the system conforms to 3G specs and the credit for executing this project goes to excellent teamwork from all quarters,” says Lootah.

“Right from sales and procurement of equipment to logistics, installation, project management and concerted efforts from INC enabled us to deliver the project in record time to host and broadcast Al Marmoum Heritage Festival and the Camel Race Championship in high definition from the new facility,” he concludes.